Doug Cramer,
Member of Board of Directors 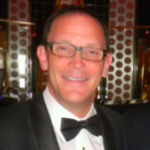 Doug has been involved in local Jewish communities since childhood, and attributes Jewish engagement with his family as helping to shape his life. He has served the role of Brotherhood President at Temple Beth David in Orange County. Professionally, Doug has spent more than 30 years in the field of both internal and outside sales, and is currently in the solar industry. He has earned numerous awards and recognitions over the years for his sales accomplishments and team leadership.

Doug’s connection to The Butterfly Project began in 2013 and has included coaching for presentations and requests for funding. He has been involved in several key projects, including key installations and filming at SDJA, Los Angeles Museum of the Holocaust, Lauder Schools in Prague and Terezin Concentration Camp in Czech Republic. Doug’s connections and commitment includes bringing donors to The Butterfly Project from his networks in both Orange County and Los Angeles areas.