A TBP Ambassador Shares Her Story 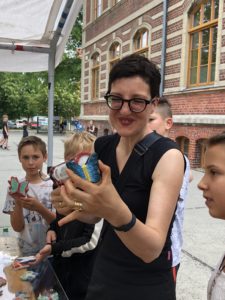 When my friend Steven Schindler first asked me if we should bring The Butterfly Project to my daughter’s school in Cottbus, Germany, I would never have dreamt of what this initiative would set in motion. Steven is the son of the Holocaust survivor Max Schindler z” l of blessed memory from San Diego. Max Schindler was born in Cottbus and he was thrown out of the country by the Nazis in 1938. Of the Schindler family, only Max and his brother Alfred survived. Their parents and their sister died in the Holocaust. (Please visit our Survivors’ Stories page to listen to Max and Rose share their stories.)

I first met Steven Schindler in 2011 when he came to Cottbus to visit places connected to his family’s history. A friend of mine, who had visited Max and Rose Schindler in San Diego, asked me if I would take Steven and his partner Amy Parish around Cottbus. When we had dinner in a restaurant that evening we talked about our families’ histories and we found out that we share the same wish for remembrance and reconciliation. This was the start of our unexpected friendship. Steve returned to Cottbus several times and in 2015 together with his parents and other family members. 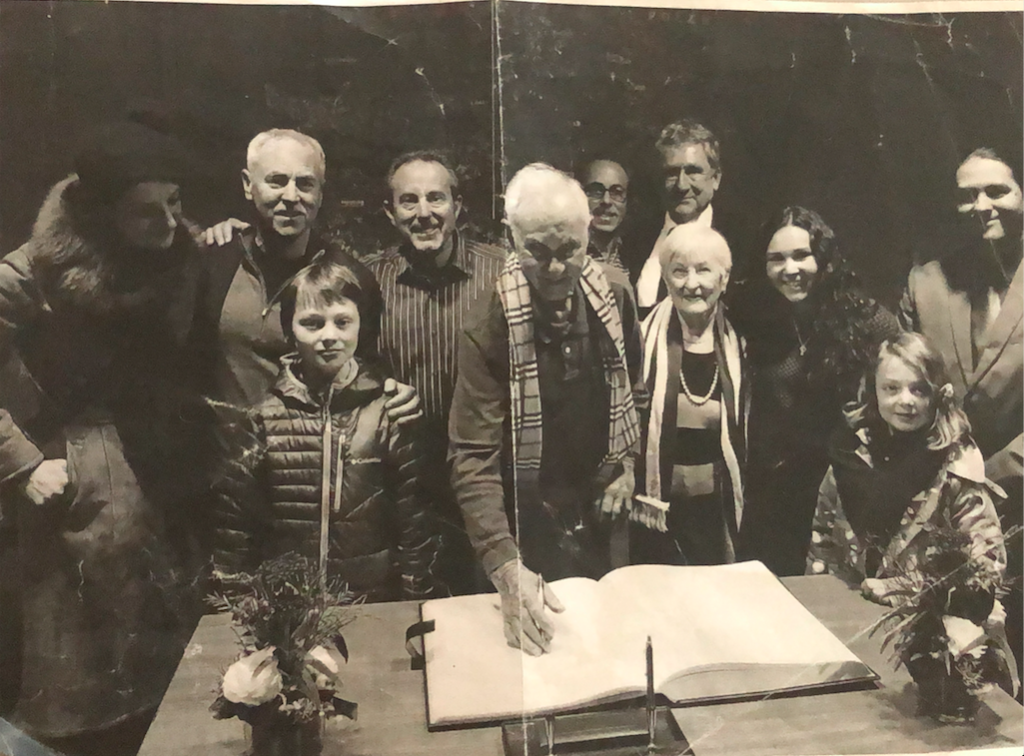 The Schindler family gathers around Max and Rose (centered) at an event in Cottbus, Germany.

When Steven came to Cottbus he always visited Bewegte Grundschule, the primary school my daughter Antonia attended. We found out that it was in this very school building, where Steven’s uncle Alfred had been arrested by the Gestapo in 1938. Steven told the kids the story of his family and a plaque was installed in the lobby of the school to memorialize Alfred Schindler. This is how the idea was born, to bring The Butterfly Project to Cottbus and to Germany for the first time.

For all who participated at the Bewegte Grundschule in December 2018, it was a very intense and a most memorable experience (Read more about this event). The Butterfly Project at Bewegte Grundschule was accompanied by a three-day-educational program. The kids saw the film Not The Last Butterfly, they visited sites connected to the Schindler family and “Stolpersteine” for children from Cottbus who perished in the Holocaust. They also looked at pictures painted by boys and girls in the Terezin ghetto and after that tried to put their feelings in letters or short poems. On the second day they met the journalist René Wappler, who decided not to back off for his own safety but to go on facing the Neo-Nazis who tried to scare him away. They discussed the book Terrible Things Eve Bunting’s allegory on the Holocaust. They translated the biography cards of the kids into German to be paired with the ceramic butterflies. The students’ families and friends were invited to paint butterflies, too. Among the guests was Holger Kelch, the Lord-Major of Cottbus.

For the students, it was hard to believe, that most of the Germans had looked away or even welcomed it, when their Jewish fellow-citizens were taken away to be killed in the ghettos and concentration camps. This made the kids very sad and angry. But seeing the film, plus the video-messages from Cheryl Rattner Price, Rose Schindler and La Jolla Country Day School (their sister-school through The Butterfly Project) made a difference. They felt that they were not alone with their hope, that something as horrible as the Holocaust must never happen again and that there are many people around the world, who – like the kids of Bewegte Grundschule – want to take action and to stand up for tolerance and peace. That’s the magic of The Butterfly Project. It‘s mission of Remembrance and Hope connects people around the world. They feel: We are not alone. Together we can make this world a better place.

When in January 2019 Bewegte Grundschule’s butterfly-installation was displayed on the front of the historic schoolhouse, we hoped that this would be an example for other schools in Cottbus and that they would join The Butterfly Project, too. What actually happened, was rather a surprise for us. In the days after the event (which was covered by the national news), phone-calls and emails kept coming in at Bewegte Grundschule. Schools and other institutions from all over Germany asked, how they can get involved in The Butterfly Project, too. That was very moving! 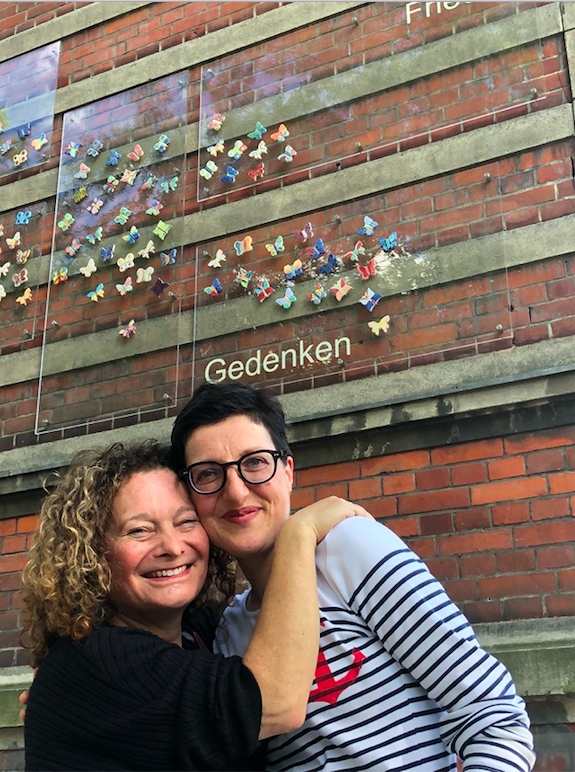 Nicole and Cheryl embrace in front of the installation at Bewegte Grundschule. 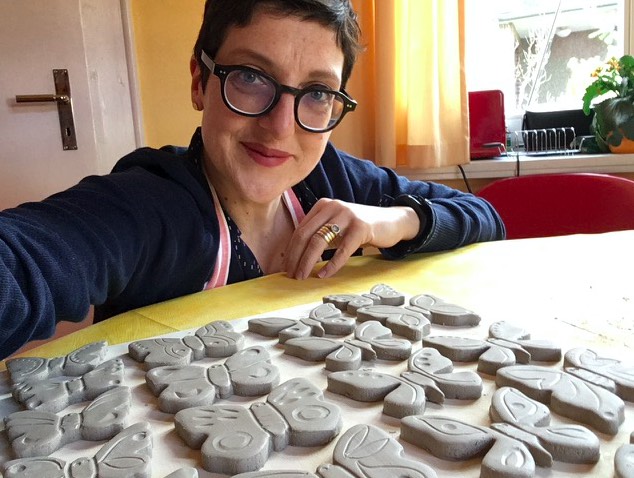 Butterflies made by hand by Nicole Nocon.

Since the end of January about 20 schools have joined. Ceramic butterflies are being painted all over the country! Many teachers told me that The Butterfly Project is just what they’ve been waiting for: A way to teach their students the lessons of the Holocaust – focusing on empathy and hope.

Encouraged by this feedback, Steven Schindler and I decided to found a new organization called „GenerationE“ that aims to provide German schools with sources of Holocaust-pedagogy and empathy and anti-hate education programs in addition to The Butterfly Project.

For us it was a great pleasure and an honor, when some weeks ago, in June 2019, Cheryl Rattner Price, the co-founder of The Butterfly Project visited Cottbus together with TBP Board member and educator Maren Oom Galarpe. It was not only the kids of Bewegte Grundschule that were very excited to meet the woman, who had co-founded this great project. Teachers from all over Germany came to Cottbus to meet Cheryl. Cheryl and Maren helped the students to add more painted ceramic butterflies to the school‘s butterfly installation. Together with the teachers Cheryl and Maren saw Not The Last Butterfly and they discussed current methods of teaching and explored how more the lessons of the Holocaust can be taught today Most of the people who had come to this meeting met for the very first time, but it actually felt like a meeting of friends.

It was a coincidence that Cheryl and Maren arrived in Cottbus on June 18th, Max Schindler‘s 90th birthday. It was a very moving moment when we visited the Stolpersteine in front of the Schindler‘s former home in Cottbus that evening – the place where I had taken Steven Schindler to visit eight years earlier. The three Stolpersteine (brass-plaques) in the pavement in front of the apartment-house memorialize Max Schindler’s parents and his sister Cecilie. 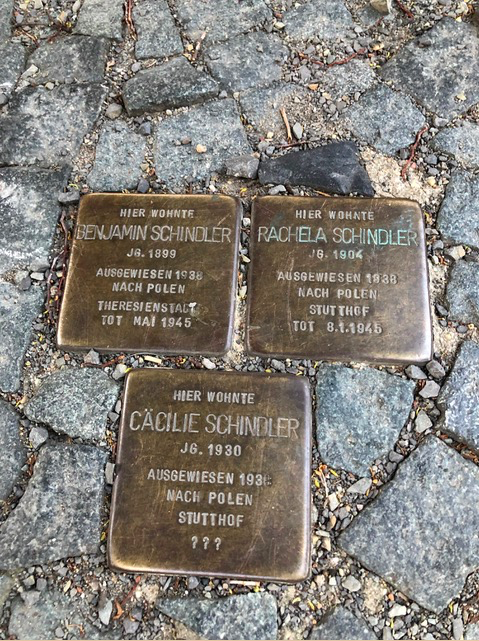 These little brass-plaques and the butterflies on the front of Bewegte Grundschule are visible symbols of remembrance. Cottbus, like many other towns in Germany and all over Europe sees the growth of neo-Nazi-forces. Intolerance and nationalism are preached again by right-winged demagogues and politicians, who seem to have forgotten, that 6 million Jewish and 5 million non- Jewish innocent people were murdered during the Holocaust. But the still growing resonance to The Butterfly Project in Germany proves, that there are many people, who want to remember and who are ready to stand up to prevent history repeating itself.