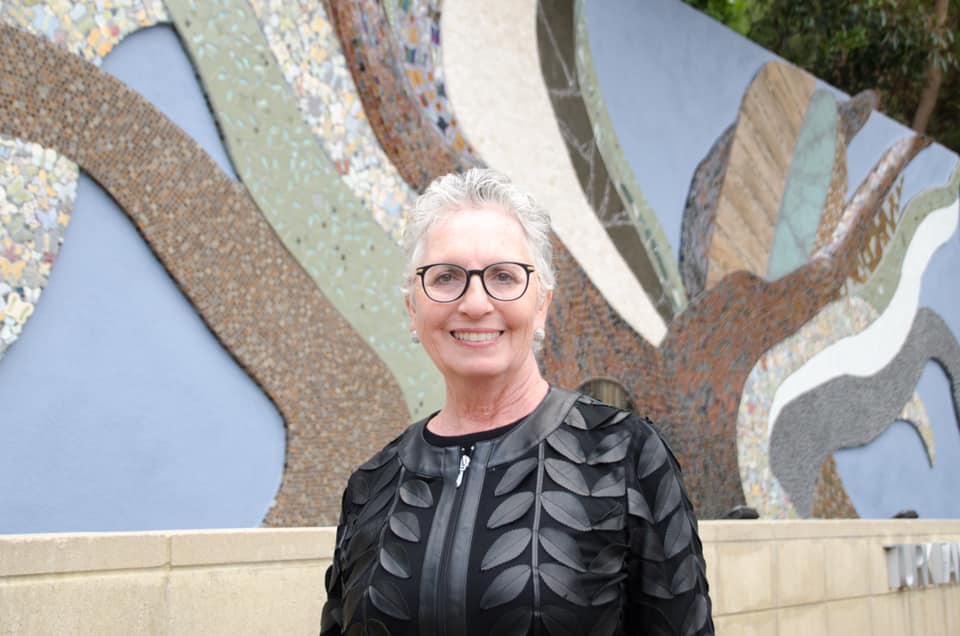 Holocaust Survivors. This title, these words, heard and read over the last 70 years, is taking on new meaning today, as these heroes are dying, as their chance to tell their stories and to insure that we do remember, is getting more and more rare. Now it is up to us, Second generation, Third generation, Fourth, and now even Fifth generation.  Now it is up to all of us. And so, seven years ago, when I took over as President of Beth El, I became devoted to building a Holocaust memorial on our campus – a memorial to all those who were lost. I wanted recognition of the horror of the past, combined with a promise of a decent and fair and humane future for us, always.

A decent and fair and humane future. Seems that future in not here yet. As it turns out, our families are still being murdered. We can’t not talk about the tragedy, the horrific act of murder against innocent people, just because they are Jewish – right in our own backyard – in our own places of worship. The shootings this past Shabbat, the attack on Chabad of Poway by a white supremacist, just reminds us that the hatred is still out there.

Our hearts and prayers go out to the families of Lori Kaye, of blessed memory, and a rufuah shlema to Rabbi Goldstein, 8-year old Noya Dahan and Almog Peretz, as well as all those who were traumatized by these events. Anti-Semitism is not going away. This white supremacist was not crazed. He was evil. He was so ignorant, mis-informed and uneducated about who we really are. ‘Never again’ takes on a new meaning. Tikun Olam takes on a new meaning – repair the world that feels like it is really broken. Repair the world by teaching love and stamping out hate. We, as Jews are strong now. We can stand up and fight. Education takes on a new meaning. Let’s fight with education. 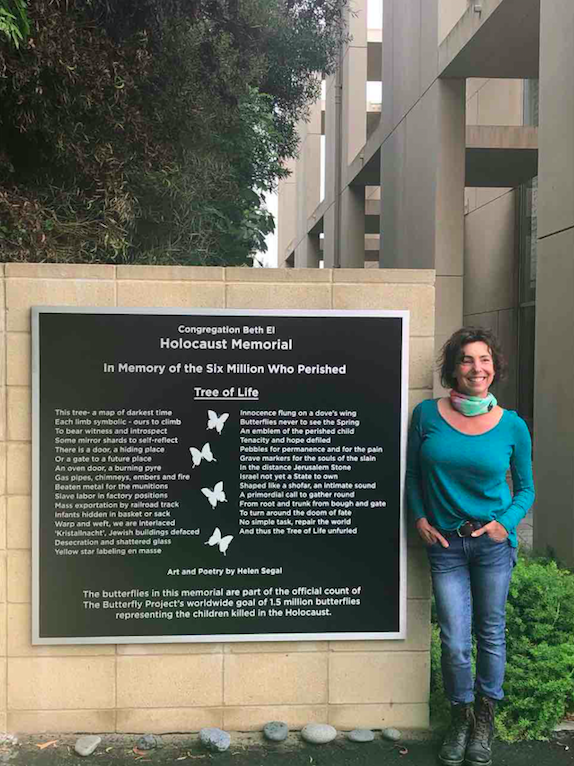 Helen Segal in front of her poem created for the memorial. Below, Sonia Ancoli Israel shares her parents story of survival with more than 250 congregants.

In the words of Leonard Cohen, “There is a crack in everything. That’s how the light gets in.”

When Cheryl and I began conceptualizing ideas for this project we determined we didn’t just want to create a panorama only of tragedy but to suggest that despite the horror of the Holocaust the Jewish people have survived and flourished. After much research and introspection, we decided to construct This Tree of Life. It is a recognition and condemnation of the darkness but also a prayer for rebirth and growth toward the light.

The recent attack in our midst is a strong reminder that misfortune can occur at any moment. But we refuse to allow hatred to take over in our hearts and evil to prevail.

The engineering of the memorial was a challenge, translating a small initial sketch into a 30 by 9-foot installation. I began by drawing a full scale chalk outline on my studio floor, followed by cutting manageable size templates out of board like material that provided the trees form. I’m simplifying the process here, but essentially I then individually mosaiced these templates in my studio. We then transported all 30 plus pieces to Beth El and assembled each as if they were a jigsaw onto the wall. My bruised and bleeding fingers and aching muscles were self-evidence of the pure physicality of it. With the laying of each tile, pebble, mosaic and butterfly I contemplated the enormity of the history that this piece represents.”

To read more about this Holocaust memorial and dedication ceremony, please read this article from the San Diego Union-Tribune. 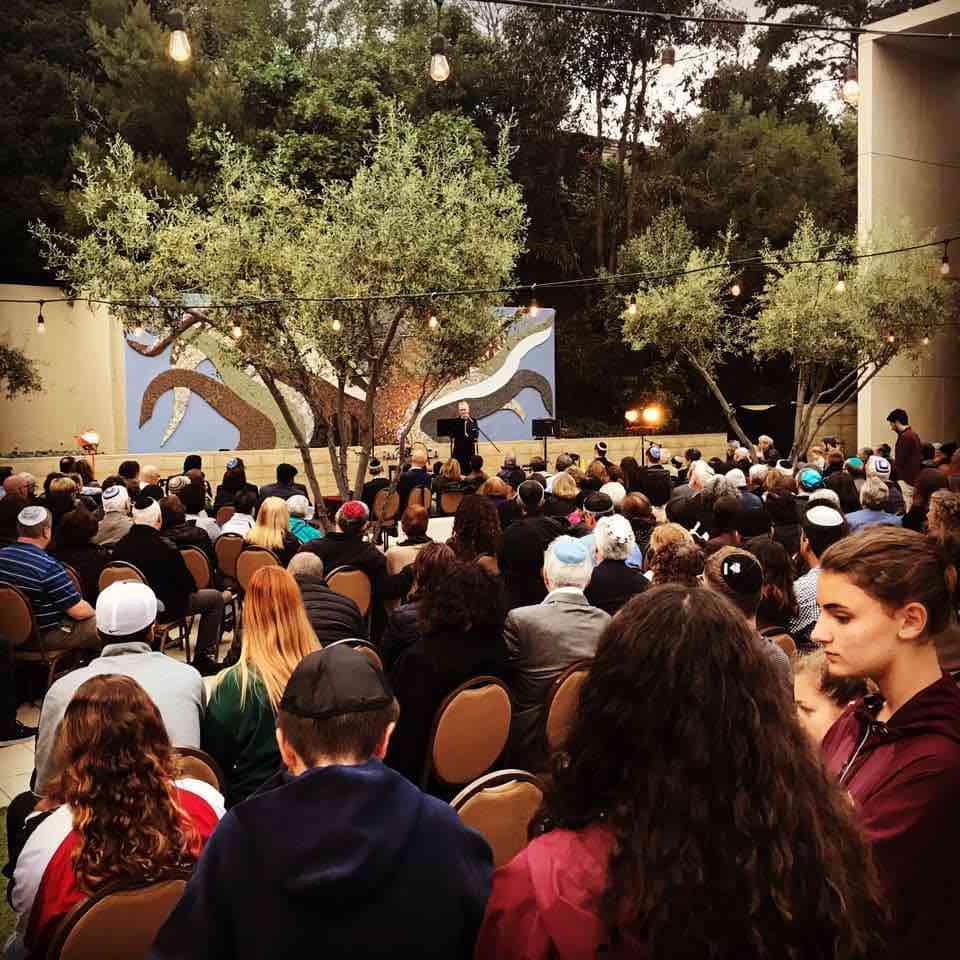 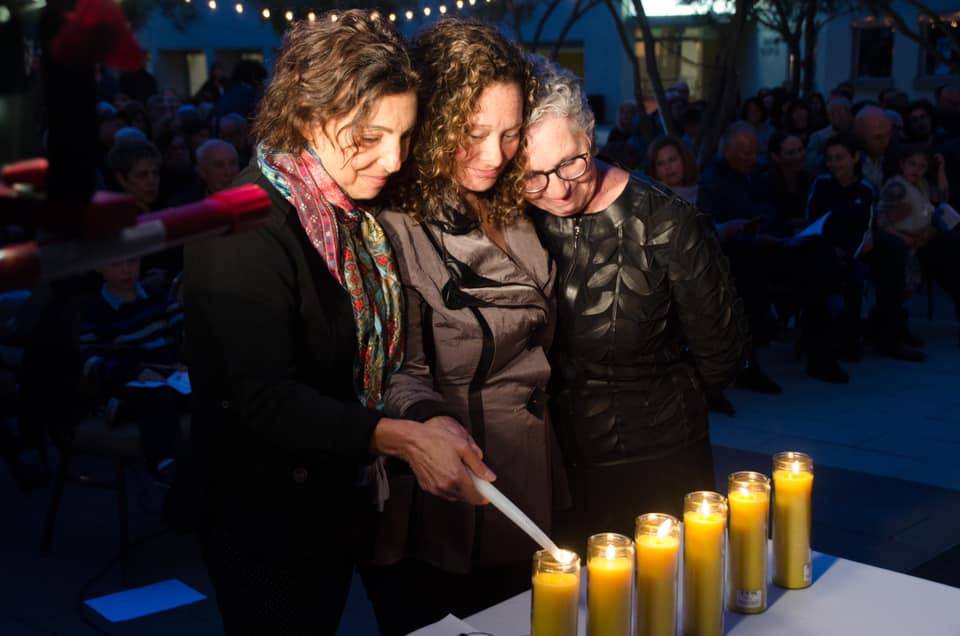 Cheryl Rattner Price has over 30 years experience in ceramics, sculpture and architectural design, creating public art that brings communities together for a cause. In addition to her work as Co-Founder and Executive Director of The Butterfly Project, she has been a pioneer for San Diego’s Anti Defamation League (ADL) Holocaust Education Conferences, particularly developing Holocaust survivor relationships with educators and students. Passionate about art, education and tolerance, board memberships include The Agency for Jewish Education and San Diego Center for Jewish Culture (JCC/CJC). Her role has expanded globally, coaching educators and artists to create impact and meaning through the effective use of The Butterfly Project for people of all faiths. Read more about Cheryl Rattner Price