Teaching Lessons from the Holocaust on Kristallnacht

On November 9, 1938, the windows of thousands of Jewish places of business were smashed and over 1,000 synagogues were burned to the ground in Germany and Austria. Many Jews were murdered and others were sent to concentration camps where they had to endure hard labor. It is believed that Kristallnacht, which in German means the night of broken glass, was the beginning of the end of Jewish life in Europe.

Teaching About the Holocaust

It was especially significant for The Butterfly Project’s Education Team to be presenting lessons about the Holocaust to a senior class at Patrick Henry High School on November 9, 2017, the 79th anniversary of Kristallnacht. Sonia Fox Ohlbaum, Arlene Keeyes, and I (Jan Landau) shared actual photographs taken before, during, and after the Holocaust. Students were asked to read quotes from people their age who endured atrocities during this horrific time. In addition, Sonia displayed the uniform her father wore in a concentration camp and Arlene passed around an actual yellow star worn by a friend of her family. She also told of her mother’s survival in a concentration camp which she attributed to the bravery of a fellow in-mate. 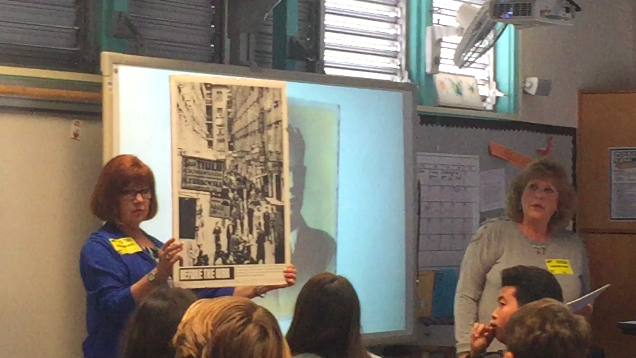 Arlene Keeyes holds up an image to teach students about the Holocaust. 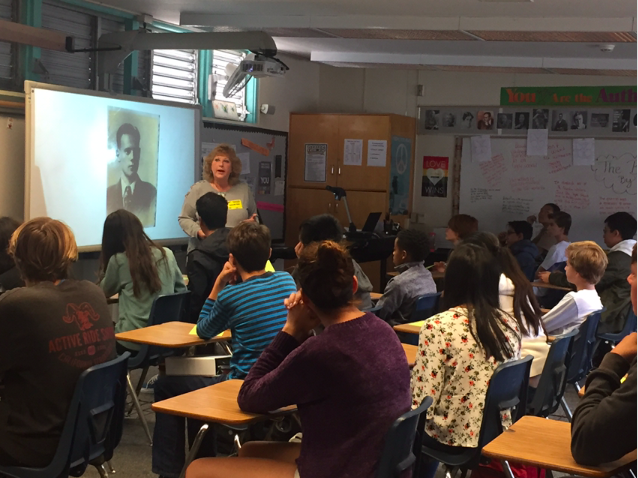 Sonia Fox-Ohlbaum shows a picture of her father, a Holocaust survivor.

The seniors painted butterflies in memory of the children who were murdered in the Holocaust. These butterflies will be added to those already gracing the walls of Patrick Henry.

One student presented the team with a quote about The Power of One–by Iris Chang, Human Rights Activist. It is as follows:


“Please believe in THE POWER OF ONE. One person can make an enormous difference in the world. One person-actually, one idea-can start a war, or end one, or subvert an entire power structure. One discovery can cure a disease or spawn new technology to benefit or annihilate the human race. You as one individual can change millions of lives. Think big. Do not limit your vision and do not ever compromise your dreams or ideals.”

The Power of One

The Power of One is a major theme of The Butterfly Project. The importance of being an Upstander, a person who stands up for the rights of others, and not a Bystander, is emphasized in the lessons presented across grade levels.

According to Erin Mangahis, English teacher at Patrick Henry, her students were totally absorbed in our team’s presentation. Hearing the personal stories, seeing primary resources, and painting a butterfly in memory of a child who perished in the Holocaust, have not only reinforced the need to stand up against hatred and bigotry in the world today, but they also helped to prepare her students to negate Holocaust deniers who permeate our college campuses.

Jan Landau has over 30 years experience as an elementary school teacher and administrator. While working at San Diego Jewish Academy as Director of Family and Special Programs, she was looking for a way to bring Holocaust remembrance to the school in an age-appropriate way. Inspired by the documentary “Paper Clips” and the poem, “The Butterfly,” written by Pavel Friedmann, a child in a concentration camp, Jan chose the butterfly, a beautiful symbol of hope and freedom, for children to make to memorialize the 1.5 million children who perished in the Holocaust. She enlisted the talents of SDJA parent/artist, Cheryl Rattner Price, and together with other parent volunteers, created The Butterfly Project – originally known as Zikaron V’ Tikvah (Remembrance and Hope).