Bringing Heart to Indianapolis and the Heartland Film Festival

By Joe Fab, director of Paper Clips and co-director of NOT The Last Butterfly

I love film festivals. Everybody who knows me knows that. And yet, I had never been to the Heartland Film Festival in Indianapolis even though it’s been around for 26 years. Thanks to Cheryl Rattner–Price and former San Diegan Craig Prater, that failure has just been rectified.

Craig and his team created a wonderful experience for filmmakers and audience members alike. NOT The Last Butterfly’s first (of two) screenings was held at the impressive Indianapolis Museum of Art. There I met a number of educators whom I would see again over the next two days, including teacher Emily Hodson who brought her family and almost 100 of her students from Allisonville Elementary School. It was a great audience – but Emily’s group’s enthusiasm really made the night! Two of her students even asked if we’ll make a sequel to the film! 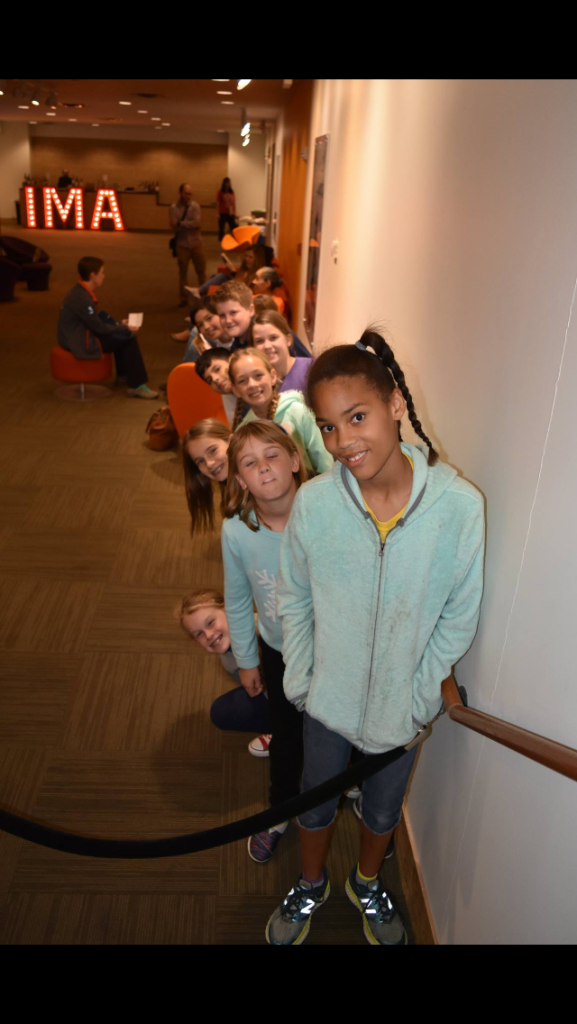 Allisonville Elementary students lining up to enter the theater. 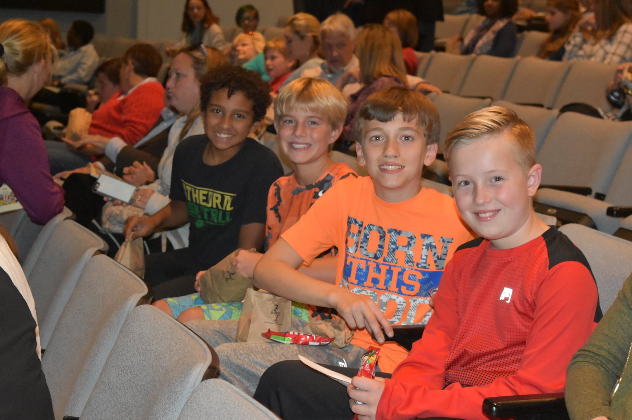 Allisonville Elementary students waiting for the film screening to begin.

The day after the IMA screening was jam-packed. We had our second screening at an AMC multiplex, and had the honor of visiting two local schools to engage in butterfly project activities with students.

At the Hasten Hebrew Academy, Maya Schmoel greeted Cheryl, Craig and me in the cafeteria. We visited with her and Principal Miriam Gettinger over lunch before being introduced to about 40 students, mostly 5th and 8th graders. The students were — as one would expect in a Jewish school — well-versed in Holocaust education, and they took to the butterfly painting at once when we moved to Mrs. Fellegy’s classroom. But what struck me more than in most other schools I’ve visited was the preponderance of art. Everywhere.

The lobby has a colorful mosaic Tree of Life, and the main hallway is lined with large framed paintings based on the Chagall windows at the Hadassah Hospital in Jerusalem. Especially impressive was the Holocaust exhibit in a dedicated area of the school, featuring student-built bunks and benches of the kind seen in the barracks at Auschwitz, various artifacts, and multiple works of art depicting scenes of the Shoah. Cheryl spotted Susan Goldman Rubin’s book “Fireflies In The Dark” right away in the Holocaust library. The butterflies painted that day will soon adorn the entrance to this reverential memorial. 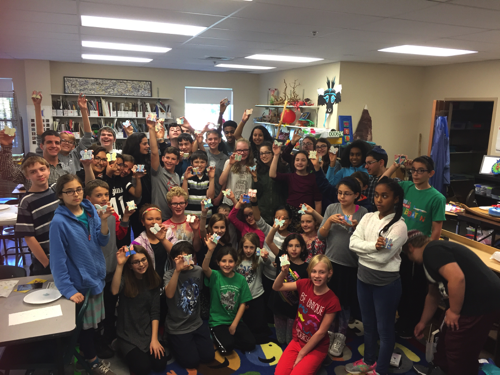 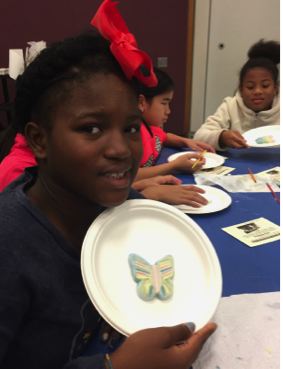 Cheryl, Craig and I also visited Emily Hodson’s school. I’ve found that you can tell a lot about a school community simply by walking into a roomful of students, and then watching and listening for a few minutes. That’s what I did in the gymnasium full of 5th graders.

The diversity is what struck me first, followed by the way that students of various ethnicities were interacting with each other all around the room. Here I was in Middle America surrounded by beautiful white, black, Hispanic, Asian and American Indian children! And things only got better from there…

After a few words from Cheryl and me, there was time to wander the room and meet people as the students painted butterflies. Watching survivor Frank Grunwald interact with the 5th graders and their teachers conjured scenes from our film: generational gaps dissolving as old and young remembered the lost children. Principal Mike Pomerenke drew my attention to a boy with special needs being supported in the painting activity by his tableful of friends. I moved about the room to speak with or observe group after group. There was respect, courtesy and compassion throughout the gym. And joy. 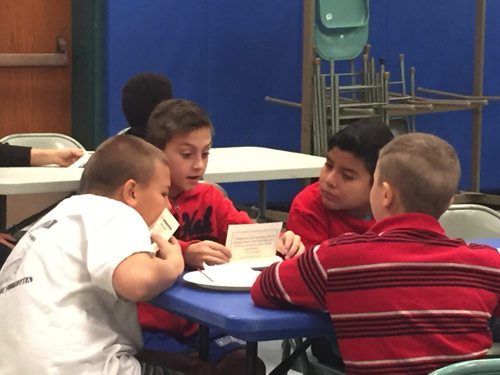 A group of boys at Allisonville Elementary School read bio cards identifying who they are painting their butterflies for.

We ended the visit by having students share about what the experience meant to them. As one student said…

“I was just touched by The Butterfly Project and the words that they said today. I felt horrible for every kid of the 1.5 million that died during the Holocaust. I learned that even if you look different or talk different, or have other beliefs, it’s not bad. I can be av nice of change by speaking up when someone isn’t doing the right thing.” – Caleb, 5th grader at Allisonville Elementary School

Don’t let anyone tell you that pre-teenagers don’t have deep thoughts and feelings. They made the connection that Frank Grunwald was just about their age when he was sent to the camps. “My child was killed when she was only six years old,” said one student, referring to the information on the identity card each card read before starting to paint. “Mine was only one year old,” said another, as a third child let out a shocked gasp.

It was a profound day for me, despite the fact that I’ve had similar experiences at scores of schools — thanks to Paper Clips and now NOT The Last Butterfly. All too frequently, I need to be reminded to hang onto my ideals, because, as Anne Frank said, “people are really good at heart.” She was right, and on that recent morning — in the heartland — a hundred or so fifth graders were helping this senior citizen believe again in the promise of tomorrow.

Award-winning filmmaker Joe Fab is partnering with The Butterfly Project on the 50 State Initiative to bring Holocaust education to all 50 states. Joe is an Emmy-nominated producer, director and writer with over three decades of experience in film and video production, media and communications, event production and the live presentation of plays and music. His feature length documentaries and other programs have appeared on HBO, Showtime, Discovery, History, and PBS, among others. His diverse client list has included the Bipartisan Policy Center, Smithsonian Institution, United State Memorial Holocaust Museum, National Museum of the American Indian, Elizabeth Glaser Pediatric AIDS Foundation, Senator Sam Nunn, National Education Association, et al. He is a member of the Producers Guild of America, the International Documentary Association, and Women In Film And Video (DC). Joe is co-director and co-producer of the documentary Not The Last Butterfly, appearing in film festivals in 2017.