A Wake-Up Call From Charlottesville

By Joe Fab, director of Paper Clips and co-director of NOT The Last Butterfly 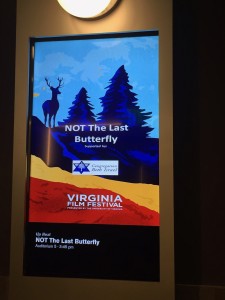 NOT The Last Butterfly poster displayed during Virginia Film Festival.

How was that serenity shattered by a hateful band of white supremacists – people who personify what we’ve proclaimed wouldn’t ever be tolerated again?

Earlier this month, we learned what we should have already known: hate and evil never really die. They simply crawl under rocks and hide in the shadows until we foolishly lower our defenses. They wait, confident that their time will come again: when we let our guard down… when we begin to forget.

In an op-ed that appeared in the New York Daily News this past January, I wrote that every day each of us is choosing to be either a bystander or an upstander, whether we consciously think about it or not. This reality has never been more critical than it is today — and will continue to be in the foreseeable future.

I also wrote that “Trump is not Hitler” – put a pin in that thought, and I’ll get back to it in a moment.

Heather Heyer chose to be an upstander on August 12. Not the flashy kind, but the everyday kind. The kind who shows up. The kind who speaks out. The kind who recognizes that hate and evil never die and who remains vigilant in that knowledge. Surely Ms Heyer didn’t leave her house that sunny Saturday morning expecting to die for having taken a stand. She simply did what she thought was right.

In her eulogy for her daughter, Sarah Bro addressed the bigots: “You tried to kill my child to shut her up. Well guess what: you just magnified her.” When I heard that, I sat back in my chair, stunned at the realization of the truth she had just spoken.

What happened in Charlottesville was like a hit upside my head, making me realize that I myself have become too lax — even as I have been making films and speaking out about the lessons of the Holocaust. Isn’t what Ms. Bro said about Heather also the essence of The Butterfly Project? Isn’t the legacy of the 1.5 million children murdered in the Holocaust that we must always maintain our diligence and our promise to oppose hatred?

I’m reminded of a story about the then-famous radio newsman H.V. Kaltenborn, as related by Erik Larson in his insightful book, In The Garden of Beasts. It was in September, 1933 that Kaltenborn and his family were preparing to return to the U.S. after an extended European tour during which he shared the common journalistic view that reports of violent Nazi extremists were greatly exaggerated. His “nothing to see here” attitude was about to be overturned by painful personal experience.

The reporter and his family were doing some last-minute shopping, hours before their trip home. A formation of Storm Troopers appeared on the busy commercial street, heading their way. Those nearby began to give the Hitler salute. Even though the government policy of that time relieved non-Germans of any obligation to do the same, Kaltenborn directed his family to focus their attention on the display in a nearby shop window, avoiding the passing parade and, he imagined, any trouble.

But several troopers and onlookers challenged Kaltenborn and his family for turning their backs. Insults were hurled at them, and tensions rose quickly. The journalist called to nearby police officers for help, explaining that they were Americans, but to no avail. Just then, someone from the crowd struck Kaltenborn’s sixteen-year-old son in the face, knocking him to the ground. One of the police officers smiled.

The Kaltenborns escaped and fled the scene. But it took that moment when violence invaded his personal space for Kaltenborn to see that the rising threat he’d been denying was all too real. And so I ask:

“Does what happened in Charlottesville strike close enough to home for us to ‘get woke’, to use the current vernacular?”

Getting back to that January op-ed: it may still be politically correct to say that “Trump is not Hitler.” But the violence in that beautiful college town where we showed our film about remembering murdered children WAS perpetrated by armed neo-Nazis and white supremacists. They’ve promised more public demonstrations and some have even promised more violence.

We can and should consider when our political correctness becomes a failure to learn from history. As far as I’m concerned, that time has come. Charlottesville was my “hit upside my head” and I intend to “stay woke.” 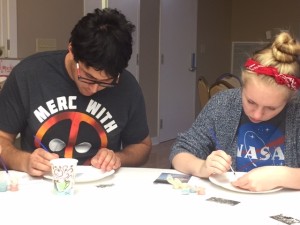 The Butterfly Project has reached out to Brody Jewish Center of the University of Virginia and Congregation Beth Israel in Charlottesville to offer butterfly painting events and screenings of our film in support of their communities’ healing. If you are feeling called to take action like we are, here are some things you can do to make a difference:

2. Donate to organizations that fight racism and anti-semitism, such as Anti-Defamation League and Southern Poverty Law Center. Or, sponsor a butterfly kit to be used as part of The Butterfly Project’s Holocaust education programming in a classroom in the 2017-2018 school year.

3. Host a butterfly painting event to bring The Butterfly Project into your community. Contact us to learn more.

4. Show NOT The Last Butterfly at a local event.

5. Engage in an honest exploration of your own biases and start talking to people who aren’t like you.

6. Share this blog post on your social media platforms. Even if just one person in your network reads it and takes action, that’s one more person working to make a difference!

Award-winning filmmaker Joe Fab is partnering with The Butterfly Project on the 50 State Initiative to bring Holocaust education to all 50 states. Joe is an Emmy-nominated producer, director and writer with over three decades of experience in film and video production, media and communications, event production and the live presentation of plays and music. His feature length documentaries and other programs have appeared on HBO, Showtime, Discovery, History, and PBS, among others. His diverse client list has included the Bipartisan Policy Center, Smithsonian Institution, United State Memorial Holocaust Museum, National Museum of the American Indian, Elizabeth Glaser Pediatric AIDS Foundation, Senator Sam Nunn, National Education Association, et al. He is a member of the Producers Guild of America, the International Documentary Association, and Women In Film And Video (DC). Joe is co-director and co-producer of the documentary Not The Last Butterfly, appearing in film festivals in 2017.